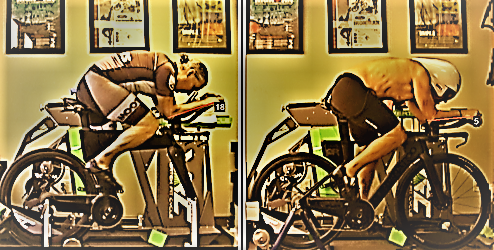 I get a lot of questions regarding hand position for triathlon – high vs. low.  Recently, after TTBikeFit posted a great summary/analysis of Filippo Ganna’s winning World Championship TT position (TTBikeFit – Posts | Facebook), I’ve had many fit clients ask me about pro tour tt positions, specifically regarding use of a high hands.

To simplify the discussion, I’d classify forearm angle > 15 deg as high and forearm angle < 15 deg as low.  I’m also limiting the analysis to hand position only, irrespective of UCI regulations.

Disclaimer – I am an engineer, but I am not an aerodynamicist.  I have a basic understanding of aerodynamics and by no means consider myself an expert.  I’ll also preface this by saying there is no absolute rule when it comes to aerodynamics and rider positions.  There are too many interactions between rider (position, height/size, speed), frame, wheels, helmet, test method, etc. to make such a claim.

Having a basic understanding of yaw angle will help make sense of the below.

Yaw angle is the angle between the rider’s direction of travel and the relative wind vector, where the relative wind vector is the resultant of the rider and the ambient wind vectors.  It’s important to realize, that these vectors are composed of magnitude as well as direction.  For any given ambient wind magnitude and direction, yaw angle will be determined by the speed of the rider.  The faster the rider, the lower the yaw angle.  To further illustrate, when there is little to no crosswind, yaw will be close to zero.  Given a 90 degree high speed crosswind, the yaw angle will be much higher, closer to 20 deg.  It’s known that most riders experience yaw angles between 0 and 10 deg during typical triathlons, with professionals spending more time in the 0 to 5 deg range due to the higher speed at which they ride.

The two main methods used for aero testing are track/velodrome (using Alphamantis or similar technology) and wind tunnel testing.  Given that track/velodrome testing is almost exclusively done indoors, yaw is very close to zero (i.e., there is no crosswind).  Some of the fastest pro tour riders/teams test on the velodrome.  Testing in the wind tunnel is done across several yaw angles, 0, 2.5, 5, 7.5, 10 deg, for example.  Wind tunnel testing has shown that a high hand position is faster at close to zero yaw, but becomes slower when tested at yaw between 5-10 deg.  This also validates the velodrome (zero yaw environment) results, which typically show high hands being faster.  Remember, the faster a rider, the lower the yaw.

So, a high hand position may very well be appropriate for someone riding > 30 mph, and therefore experiencing low yaw, such as in a pro tour time trial.  Another variable to consider is that these pros tend to be near zero torso angle, while most amateurs are not.  For most triathletes, even elite age-groupers and pros, who might average between 23 and 26 mph in an ironman bike, a low hand position is most likely faster.  For average age-groupers riding high teens to low 20 mph and spending much of the time at yaw (5 to 10 deg), a low hand position will almost certainly be faster.  I also get asked about closing the gap to the head (shielding the chest) with high hands.  For most riders, I think this simply increases surface area at yaw, which is counterproductive.

Looking at some of the sports best cyclists also lends credence to the above.  These athletes tend to have the input from experts, sponsor support, and the ability to test.  Many of the fastest cyclists in triathlon (Frodo, Kienle, Ryf) have forearm angles in the 0 to 10 deg range, and many in the 0 to 5 deg range.

Another topic related to a high hand position is rider comfort.  The idea that higher hands is more comfortable has been touted by many as grounds for adopting the position.  I don’t agree with this.  I think a relatively small amount of rise (up to approx. 5 deg) can improve comfort.  Beyond this, I find it starts to become less comfortable for most people.

Keep in mind, I haven’t even mentioned elbow/pad width and how that might interact with hand position.  To further complicate things, when considering yaw angle, tunnel testing is the only method that can really tell us anything.  However, wind tunnels don’t consider transient or pulsing wind conditions so there’s discussion about real-world validity of tunnel results as well.  This, as well as specific test protocols, has significant impact on how results and claims made by product manufacturers should be interpreted by most triathletes.  This may be a good topic for a future post.

The takeaway is there’s no one-size-fits-all solution.  Every rider/situation is an experiment of one and must be tested.  When fitting clients, I typically use a max forearm angle of 10 to 15 deg, beyond which generally results in diminishing returns for comfort and aero.

Questions? Want to book a fitting?